Caveat #3: The e260 does indeed show up as a removable USB drive on the Mac (on the Desktop as “Sansa e260” and on the command line as /Volumes/Sansa e260), but it takes a little futzing. If you go into the Settings menu on the e260, there is a “USB Mode” setting, which by default is set to the Windows-friendly but Mac-hostile “MTP” mode. To work with a Mac, it needs to be set to “MSC” mode. In fact, my experience has been that both modes need to be used to get a reliable connection between my Mac and the Sansa. Here’s the dance that always works for me: 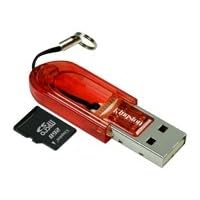 This leads me to believe that the (“version 1”, at least) Sansa e200 series can’t support the larger microSDHC cards, not because they’re larger, but because they aren’t FAT-16 formatted (nor can the cards be, since they’re too big for FAT-16). Rather, my guess is that it almost supports them, because it mostly (but not quite totally) supports FAT-32. It possibly can read them and play music and videos on them. It possibly can show them on a connected computer’s desktop if they’re inserted into the e200 after it is connected to the computer.

As for Rockbox and the 2 GB microSD card, everything works fine. I can create M3U playlist files at the top of the “NO NAME” disk exactly like I can for “Sansa e260” and Rockbox sees them and plays them: